A Lot of Hot Air

The gas lights in the Industrial Gallery

Apart from being one of the most striking architectural features, the gas lights that hang over the Industrial Gallery are an important reminder of the Museum’s roots. They are beautiful to look at and vital to telling the story of Birmingham Museum and Art Gallery. However, they are also mysterious and we are still trying to find out exactly how they functioned.

This picture shows the Gas lights above the Industrial Gallery during the 1960s. During this period they were not visible from the gallery.

The gas lights have a number of different names. The term ‘Gasoliers’ comes from French ‘chandelier’ and is frequently used in literature about the museum. However, my favourite name is ‘Sun-Light Burners’. This was used to describe them in the minutes made at meetings about opening a gallery. Apart from being vaguely poetic I prefer this term because it accurately reflects their job. 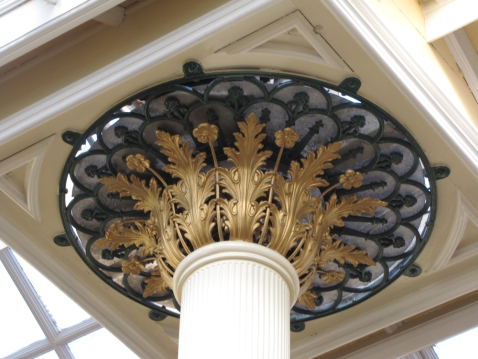 This is the top of one of the lamps in the Industrial Gallery.

There are seven gas lights in total. Two in the Edwardian Tea Room, three in the Industrial Gallery, one in the Round Room and one above the Vestibule reception area (in every room of the original gallery). They were manufactured by Messrs. Strode and Company from London for the cost of £488.

This is the lamp above the Round Room. I imagine this lamp in particular would have looked like the sun when lit.

The purpose of having gas lights was revolutionary. It reinforces the argument I made in my previous blog entry about how Birmingham Museum and Art Gallery was an institution designed by the people and for the people. In the 1880s Art Galleries were the domain of the middle classes. As well as being a place to see beautiful objects they were also a place to be seen by your peers. Because museums were lit only by sunlight they were only worth visiting during daylight hours. Working class people, generally, did not finish work until the evening and therefore would not be able to see the exhibits.

By providing gas lights Birmingham Museum and Art Gallery enabled these people to view the exhibits too. This explains why the term ‘Sun-Light Burners’ applies so well. The Museum was established specifically to inspire the artisans, therefore it would have been a huge mistake if they could not view the things specifically displayed to inspire them.

When the gallery opened in 1885 it was on top of the newly municipalised city gas offices. Nowadays there are only two things to remind us of this: the Foundation Stone in the main entrance and the gas lamps. 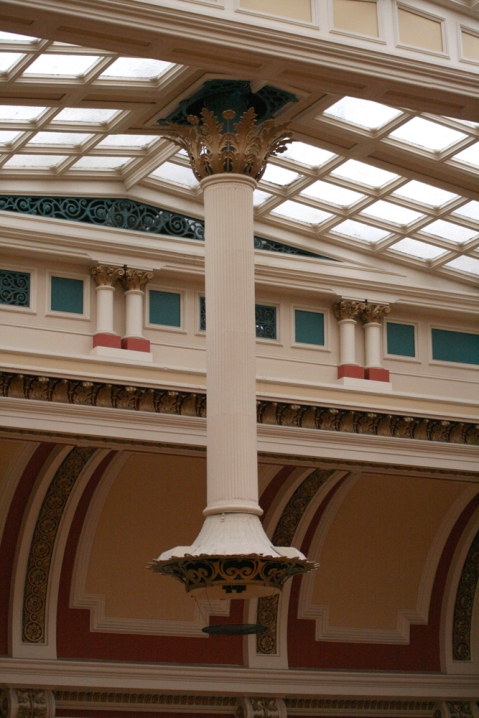 This is one of the Lamps above the Edwardian Tea Room.

So the practical considerations: how were these lights lit? Naively, when I first considered this question I imagined a Victorian man leaning over the iron work on the balcony of the Industrial Gallery with a large wooden stick, prodding the lamp from a distance and hoping for the best. Obviously, this was not the case. In the case of the lamps above the Vestibule and Round Room, they were winched down to a gentleman below who would light it, shout up to say it was ready, and then be winched up again very early in the morning. It is clear to see that the entire structure would have moved because today they are hidden away in the ceilings. When stood in the roof space this sort of movement is also evident from the design of the lamps themselves.

This shows the mechanism used to winch the lamps down so they could be lit.

For the lamps above the Edwardian Tea Room and Industrial Gallery the procedure less obvious. There are winching mechanisms in the roof space but the outer structure of the lamps is clearly static. I am currently waiting to see the original blue prints, which will reveal the procedure but at the moment my best guess is that an internal part was winched down to the floor where it was lit and then brought back up. 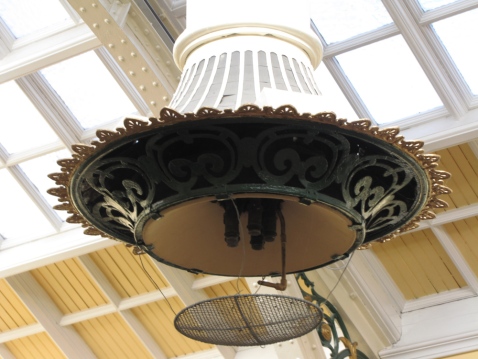 This is a close up taken of the pipe where the gas came out.

The one question we, as Visitor Assistants, always get asked is ‘do they work?’ As the lamps used Town Gas, which is no longer used, it is impossible to tell. Also there are a plethora of conservation issues connected to having gas lamps and oil paintings in immediate proximity so it is probably for the best that we don’t use them today!

So the importance of these architectural features is huge. They remind us of the connection to the gas offices. They are a visual symbol of the equalising effect Birmingham Museum and Art Gallery had on the cities communities when it opened. They also fill everyone who sees them with curiosity and invite questions that we still cannot fully answer.

Here at Birmingham Museum and Art Gallery (BMAG) we are all excited about the opening of our latest exhibition ‘STATIC: Still Life Reconsidered’. The exhibition explores the art of still life so we want to see your still life creations!

Whether through photography, paint or sculpture, whether you’re a budding artist or a professional, we want you to share your still life artwork with us! Simply snap an image of your very own still life and post it with the hashtag #staticstilllife on Twitter or @STATIC_STILL_LIFE on instagram!

Selected work will then be featured on the plasma screen to the entrance of Waterhall throughout July to September for all our visitors to see. You can check out your piece as well as many others at @BM_AG and @thinktank.

The ‘STATIC: Still Life Reconsidered’ exhibition is on at the Waterhall Gallery, Birmingham Museum and Art Gallery, from the 26th July- 31st December. For more information visit; www.bmag.org.uk/events?id=3304

We look forward to seeing your still life creations!

Images hashtagged #staticstilllife will be featured in the slide show. The still lives featured will be chosen by the marketing team at Birmingham Museums. No correspondence will be entered into about the choice of the Still Lives featured.

The entries to the slideshow will be chosen from twitter and Facebook at the end of each month. We may also feature entry images on the BMAG Pinterest page. You retain all rights in, and are solely responsible for, the content you post. When you send your images to Birmingham Museums, it still belongs to you but we can show it to people and others can share it on different social media platforms.

Hi my name is Rose I am the new, ICON intern in preventive conservation at Birmingham Museum and Art Gallery and I will be here for 12 months. ICON (Institute of Conservation) gives people the great opportunity to gain valuable work experience through their internship scheme by closely working together with institutions such as Birmingham Museums Trust. These internships are funded by the National Lottery Fund.

My background, I have recently been awarded with the Masters in Conservation of Historical Objects from Lincoln University and with a degree in History of Art with Museum Studies. My practical work experience within conservation and the heritage sector is as a volunteer. I feel very lucky to have been given the opportunity by ICON and Birmingham Museums Trust to work as part of a professional team to gain some much needed work experience in the field of conservation. I am particularly interested in preventive conservation and collections care, because I believe preventing objects from damage should always be the first approach when dealing with heritage objects.

Being a preventive conservation intern I am involved in a large number of projects related to collections care. This means I am dealing with objects that are on display in the galleries but also objects that are in storage. For example one of my key roles is looking after the Hanwell environmental monitoring system that records relative humidity (amount of moisture held in the air) temperature and light, as any of these factors can have long term damaging affects if not controlled. My role in relation to this is to check the incoming environmental data for any abnormalities.

When objects are not on display in the gallery they need to be stored in a stable environment for their long term preservation, so a big chuck of preventive conservation deals with creating suitable storage solutions. As an intern I have been given a project to assess the silver collections storage environment. Silver is quite vulnerable to gaseous pollution as it easily tarnishes, which can be quite disfiguring. Unsuitable gaseous pollution can be given off by various things such as other objects, made of other kinds of materials, in close proximity.

To see if there are any particular areas of concern in the silver store I have started to set up an environmental monitoring system that records relative humidity and temperature, as high relative humidity in collaboration with gaseous pollution can support tarnishing. 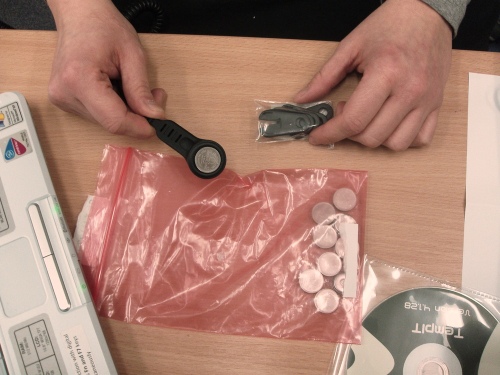 The button loggers that record the temperature and relative humidity in the silver stores.

In January I will also place little samples of silver, copper and lead throughout the store to see if they react to the surrounding environment, which could indicate if there is a problem of gaseous pollution.

Video of Rose explaining the environmental monitoring of the silver collection stores:

This kind of assessment can take up to a year and will be my main, ongoing project. Please check my blogs for updates on my progress.